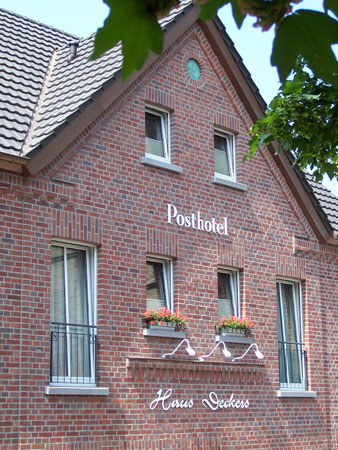 Comfortable and cosy guest rooms give you a homely feeling of "being at home". All rooms are equipped with shower, toilet, telephone and television. You also have free wifi. You have the choice between the main house from 1863 and 1936, which is a listed building, or the younger house, the one on Luciastraße, built in 2006.

Here, in the "Neue Post", a small but fine special feature awaits you in the naming of the hotel rooms facing the front. They are named after historical Walbeck buildings and the corresponding view of St. Nicholas Church, Lucia Chapel, the White House, the Pastorate, the Chaplain's Court, the Steprather Mill and the Coke Mill* are included.
The rooms in the main house have kept their old names, such as „Musiker-Kamer“, „Markt-Kamer“ and „Mans-Kamer“**. After renovation in 2014, the Princess Room, the Grenadiers Room and the Smugglers Room*** have been added.

Furthermore we can recommend our attractive arrangements, where
relaxing, experiencing and enjoying is a priority.

* Admittedly - unfortunately only one wing of the coke mill can be seen; but the office of the commissioned architects was located in the mill and therefore this name could not be missing.
** Man - short form of Hermann
*** with escape route over the roof ;)